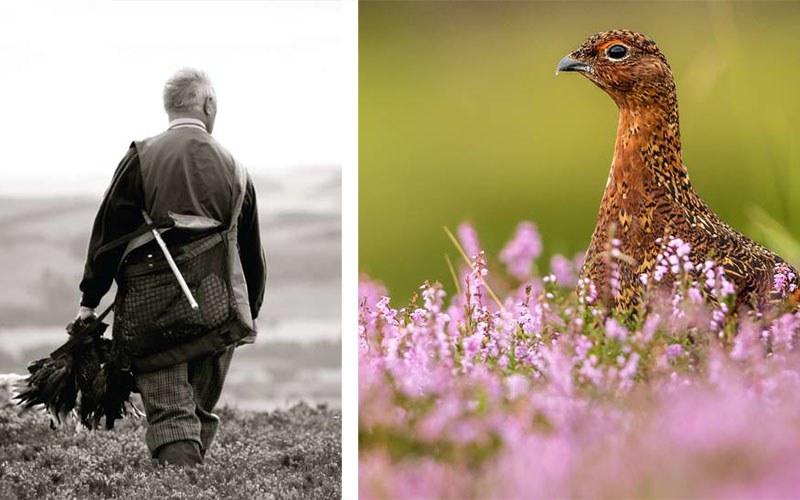 For those who are lovers of game the day is almost here – the ‘Glorious Twelfth’ signals the start of the grouse season on the 12th August.

Perhaps some would say the date is not a cause for jubilation, well not for the grouse anyway. It also clearly announces that autumn is not that far away.
Up until this time though, the birds have enjoyed a long and fruitful life wandering and foraging on the British heather moorlands, living an entirely natural and most importantly, wild existence. Grouse are truly wild unlike pheasants and partridge which are raised from chicks indoors.

Being highly regarded for its rich, lean meat our native grouse is a prized seasonal British delicacy from the middle of August through to December. The flavour is so unique which can be largely attributed to the grouse’s diet as it feeds only on heather and the small insects that live there.

Eating grouse also helps with the conservation of our moorlands as many of the moors are managed to increase the density of the grouse. This ensures that the habitat is maintained to allow many other indigenous birds, plants and animals to flourish, thereby protecting our native flora and fauna.

The wonderful native grouse has been added to the ‘Ark of Taste’ by Slow Food. This is a rare and well deserved achievement.
It is referred to on their site as “the finest game bird in the world both from an organoleptic and a shooting perspective.”

The best way to enjoy grouse is to roast it simply, rare or medium so that the natural flavour can be appreciated. Traditionally it is served with the thinnest crispiest game chips and bread sauce. You could try our recipe for Pan Fried Grouse with Blackberries and Blackberry Dressing.
Photos: © Blackface Meat Company, childsdesign
← The Shetland Cure preserving salt cod tradition Recipe: Pan Fried Grouse with Blackberries & Blackberry Dressing →